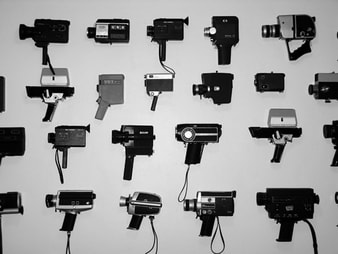 Students will gain personal experience using a Super 8 camera and actual film during the first weekend, and then work on editing material after film processing and transfer has been completed the second weekend.

Although Super-8 film was introduced by Kodak in the mid 60's as an improvement on the existing Regular 8mm home movie film, in irony it has proven to be the most enduring of all film formats. While the use of celluloid film in professional production has largely been replaced by digital, the humble Super-8 format lives on. Adopted by artists and independent filmmakers, Super-8 with its artistically grainy analog appeal is the perfect foil for today's super slick digital images. Music video producers in particular have latched on to Super-8 film because of it's unique ability to express visually the dense emotional themes that run through some of today's most important music.

In Asheville School of Film's Super-8 Music Video Production Class, students will conceive, shoot and edit a music video on Super-8 film for a local indie band, Wasted Wine.  Once shot, the film will be processed in LA and transferred to HD for digital editing.  Using some of the best Super-8 cameras ever manufactured, Kodak Super-8 film and and Adobe Premiere Pro editing software, students will take a step back into the analog past in order to propel their creativity into the digital future.

Wasted Wine is an eclectic gypsy rock band using unique instrumentation to blend their various styles. Each performance is filled with a truly original, high energy party vibe, with strange surprises and audience interactions. Live, the quintet fills the stage with harmoniums, celestas, cymbals, violins, bouzoukis, and pedals galore. The band consists of front man/violinist Robert Gowan, co-writer and keyboardist Adam Murphy, guitarist Buck Dollars, bassist Lou Buckingham, and drummer Jaron Ferrer. Established in 2006, Wasted Wine has performed extensively in the South-East, ensuring that a little bit of weirdness be embedded in the local arts scene. Their steady musical output has earned attention from regional and national media outlets, with their latest release, "Wasted vs. The Hypnosis Center" being featured on NPR's All Songs Considered.
​​
Listed below are a few examples of recent music videos shot entirely or in part on Super-8 film.
Everywhere With You” : The Pains of Being Pure at Heart
“Still Sound” : Toro Y Moi
“My Manic & I” : Laura Marling
“2 Bodies 1 Heart”: Noah and the Whale

Cost for the workshop is $295 (with alumni receiving a 20% discount) and includes access to equipment, film stock, film processing, and transfer.  Contact us for more details or to register early with the following form!